After finishing that Cerebella piece, I had the growing nerve to draw another fanart. I tried to come up with reason to do another Skullgirls piece, but just couldn’t find any inspiration to do any of the other characters while keeping it appropriate for all viewers. So, I turned to my favorite fighting character of all time – Q-Bee. Quite possible the coolest Darkstalkers character of all time, I am rather disappointed that she does not show up in the newer next-gen games. I don’t know what it is about bee characters, but Wasp is also my favorite female superhero in the Marvel universe… interesting. Maybe I’ll do her next? Either way, it’s back to school for me now that break is over. I have to give a speech next Monday and I’m not looking forward to it!

Accidentally flattened my PSD for this image, but was able to save out some in-process images beforehand. You can see the process on my facebook! 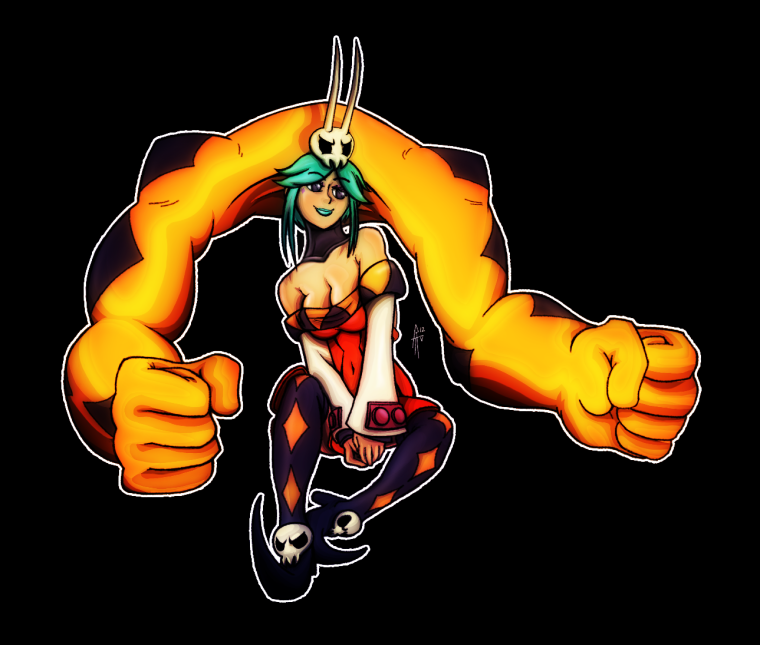 Decided to finally do a personal piece for a change. Man, it’s been what? Almost 4 whole months since my last one? Time sure flies!! Here is Cerebella, one of the characters in the upcoming fighter game, Skullgirls. I did this piece in Photoshop with my new Intuos 5 tablet. I wanted to put it to work on something special all week! So here we are. Skullgirls is a groundbreaking game – it’s all hand drawn, HD sprites, unpixelated, shaded with 3D lighting inside of the engine, and it just goes on and on from there. I had the opportunity to try out for Skullgirls as a clean-up artist, but sadly didn’t make the cut 2 years ago. I wonder if things would have been different had I been at this level back then instead of where I was. Oh well! Skullgirls drops on Tuesday this week on the PSN and Wednesday for XBLA. I’m going to definitely pick up a copy for my PS3 – will you?

PS – if you’re curious about my progress for this image, check it out on my facebook!