Well, that day has finally arrived. I have finished my Senior Project and the showing went pretty well tonight in the showcase. I received some nice compliments and it really felt great to finally finish this thing! Jeez, it took me forever! Over 30+GB of assets, 25 different After Effects Compositions, and over 300 layers, it feels great to finally complete it. So much work went into this little film and it somehow feels like it could be better. There are some shots that are really bugging me, but perhaps it’s just hind-sight speaking and my OCD. I will put this film in the books and put it behind me. I need something fresh and something new to work on. The future is bright! I have posted the video below, however it will only be public until May 26th for personal reasons. You will need a password to access the film afterwards.

The working title for the film was “Nowhere to Go”, however, I had always meant to change it. I settled on “Kuiper’s Sail”, because I want the focus to be on the story, rather than the lyrics of the song. It’s about this dude’s journey across the solar system to find earth and find peace. He’s flying in a ship, sailing per-say, inside the depth of the Kuiper Belt. I like to think of him as the lost explorer, perhaps Kuiper himself. Hence, Kuiper’s Sail.

With that, I begin work on my stop-motion final. It’s ironic, because at the showcase my puppet won Best Stop Motion Puppet – Foam in the show. And, I haven’t even animated that final stop motion film yet! Awesome! I’m looking forward to it, especially since it’s tangible.

Give me feedback on my senior project if you can. I’d love to know what you think!

Just uploading some new shots from my senior film. I’m getting excited! Here’s to hoping I finish my project this week!

Hello everyone. Sorry for not posting over spring break! Believe it or not, I was not out partying or anything like that this past week. In fact, I was working hard on my Senior Project, trying to get all the technical issues fixed and making it look better and better. There is just an issue or two left that I was able to spot in these frames, but otherwise I think they are complete. This will be actual footage of the final video. Let me know what you think!

Hey guys. Just a quick little update. I worked all yesterday on a new thrust for my little astronomer. Tell me what you think and how it compares to the old!

Flying into the orbit of the dark side of the moon...

Some interesting edits are shown here that I want to talk about. In the first image, you will see the introduction shot, first-person perspective of flying into the dark side of the moon. I have added a particle effect to help give off the impression of acceleration. Hopefully, it will look as if he is soaring quickly into the shadows, never to return. 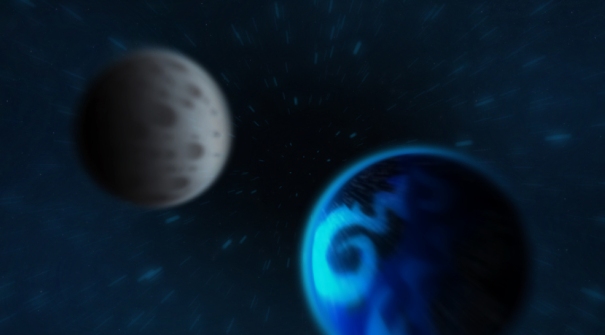 Our home being consumed by an unknown force!

The next shot is of his flashback sequence. He is remembering his home and trying to figure out how it disappeared. This is a shot of the earth and the moon getting sucked into the shadows as if in a whirlpool, almost like a black hole. I added some nifty lightbursts onto the two celestial bodies. This worked out better than the multiple other effects I had tried. I started with a radial blur, directional blur with a keyframed direction, as well as others. Nothing quite did it like a light burst, though. I am pretty sure I will keep it. I might change the particles later, but overall I am quite pleased with this bit. The 20 second scene is fully ready to go.

What's that light at the end of this chasm?

The last scene is the stomach pan, where he gets swallowed up. He is flying into the belly of the beast, unsure of what he is going to find. I added acid clouds to the composition. I changed them to a neon green to sort of make the reds conflict with each other and pop out on the screen. On top of that, I added a keyframed Spherize effect over the particle passes and had it parented to the ship’s movement. This makes the particles warp around a sphere, which makes it look as if the particles are physically interacting with the ship as it moves through the clouds. Pretty nifty! Finally, I added in a subtle background pass. There are faint animated ribs in the far, far background that move as he flies through. This should make the belly of the best look as if it is truly alive. We will see when I eventually render out some tests.

That’s all for now. Back to work.

Started to compile some new assets together today. Spent probably five hours getting it all together. I jumped ahead to the stomach scene and started putting the pieces together for that puzzle. The 15-second pan shot is just about finished. I need to add some stomach acid splurts, drips, and more particles. Good work day today!

Flying carefully through an asteroid field... 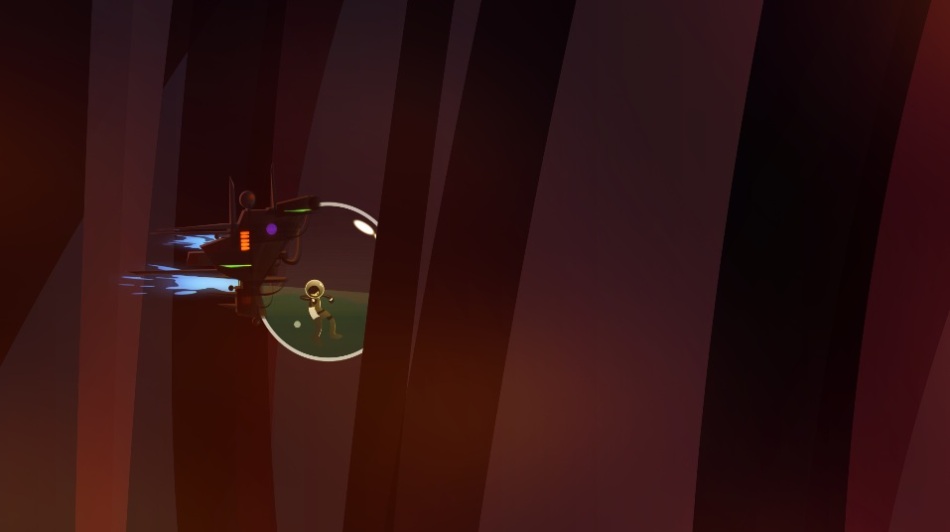 Our hero has been swallowed whole!

I’m also trying to figure out if I should change the ships thrust to match more of what the animatic shows. I think that I should, but don’t know how to do it effectively. Any tips or advice would be great!

This is what I worked on all of last semester in Senior Project. Even though I had a lot of this piece animated last year in After Effects, I had some inconsistencies and this big pit of unknown riding with it. So, this past semester I worked it all out in Toon-Boom, kept it simple, and got the whole piece down. This is good because this paves the way for finishing the project by May. It’s a perfect blueprint to the very second. I finally decided to upload it instead of keeping it a secret. Let me know what you think!

Oh, and if you’re wondering, there is exactly 20 seconds of black in the beginning intro. This space is reserved for title slugs during the final piece.